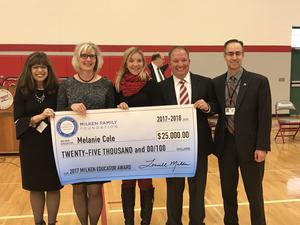 Decision-making, communication and socializing are key life skills for any teenager. Add in developing career portfolios and video resumes and you have a recipe for success for any graduating senior. However, at Slippery Rock Area High School it’s the special education population that have their life track figured out: 100% are empowered and prepared to choose either college, vocation or military post-graduation due to the dedication of their transition coordinator Melanie Cole. She’s usually the driving force behind their curriculum and activities, but today she stopped still in her tracks during an all-school assembly filled with 600 cheering students.

SANTA MONICA, Calif., (October 31, 2017)—Decision-making, communication and socializing are key life skills for any teenager. Add in developing career portfolios and video resumes and you have a recipe for success for any graduating senior. However, at Slippery Rock Area High School it’s the special education population that have their life track figured out: 100% are empowered and prepared to choose either college, vocation or military post-graduation due to the dedication of their transition coordinator Melanie Cole. She’s usually the driving force behind their curriculum and activities, but today she stopped still in her tracks during an all-school assembly filled with 600 cheering students.

Cole is the only Award recipient from the state this year, and the first from the Slippery Rock Area School District. Cole is among up to 45 honorees who will receive this national recognition and unrestricted $25,000 cash prize for 2017-18.

The Milken Educator Awards, hailed by Teacher magazine as the “Oscars of Teaching” has been opening minds and shaping futures for 30 years. Research shows teacher quality is the driving in-school factor behind student growth and achievement. The initiative not only aims to reward great teachers, but to celebrate, elevate and activate those innovators in the classroom who are guiding America’s next generation of leaders. Milken Educators believe, “The future belongs to the educated.”

There are no disabilities, only abilities and that belief permeates the entire community in part to the positive culture of acceptance Cole has instilled at the high school and through partnerships with local businesses. Whether it’s a joint sports competition, school activities or participation in the “Spread the Word to End the [“r”] Word” campaign, Slippery Rock students enthusiastically support and respect each other. Cole’s strength is her ability to instruct all students, provide special education opportunities and train fellow teachers in making connections.

“The goal for special education teachers is to ensure their students progress through school successfully with access to the same opportunities as their peers: to be educated and develop life skills that ready them for college or a career,” said Jane Foley. “We applaud Melanie Cole for creating a culture of inclusion and understanding for all students in her school and community. She’s ‘all in’ and we are excited to witness the impact her vision and can-do attitude will have on the state and the nation as a future leader in special education.”

“Melanie Cole is the consummate professional who leads by example,” said Dr. Alfonso Angelucci. “She is continually finding ways to help her students succeed while also creating avenues in which all students can work together to find success. She has a deep respect for all kids – regardless of their ability level.”

Melanie Cole, a special education teacher and transition coordinator at Pennsylvania’s Slippery Rock Area High School, is known throughout the community as a champion for the district’s students. She pushes for positive outcomes and gets them. In an era of high stakes testing, Cole has been instrumental in the implementation and monitoring of both programs and students that has resulted in great success. Previously considered as underperforming, these same students can now boast of improved scores that have helped earn Slippery Rock High School distinction among the best high schools as reported by the U.S. News and World Report. As a teacher and transition coordinator, Cole works tirelessly with students and their families in an ongoing effort to connect them with post-secondary educational institutions, military personnel, as well as local businesses. As a result, 100% of her students will have the opportunity to contribute to society while pursuing future endeavors.

Cole is credited with helping to create an environment where all students are respected and given opportunities to succeed. In the Interscholastic Unified Sports (IUS) initiative, students with and without intellectual disabilities come together to compete against neighboring schools in soccer, bocce, and track. The program has served as an opportunity to educate all students on the importance of accepting one another. Cole’s commitment to IUS was never more prevalent than when her boyfriend, now husband, proposed to her after a championship game in front of her team and all of their fans.

Cole coaches the varsity girls’ soccer team and serves as the school’s National Honor Society (NHS) coordinator, modeling the organization’s core values: character, leadership, and service.  She leads special education department meetings at the high school, collaborates with special education teachers in other buildings, and helps to organize an autism awareness event held in the spring. Cole also works in conjunction with the physical education staff and wellness committee that has initiated a number of school and community events including an alumni flag football game, a 5K run, and an annual volleyball tournament. Whether in the classroom, on the field, or in the community, students know that Cole is forever in their corner.

Cole earned a bachelor’s degree in elementary and special education from LaRoche College in 2006, along with masters’ degrees from Slippery Rock University in Special Education (2012) and Special Education Supervision (2017).

More information about Cole, plus links to photos and a video from today’s assembly, can be found on the Milken Educator Awards website at http://www.milkeneducatorawards.org/educators/view/Melanie-Cole.

Milken Educators are selected in early to mid-career for what they have achieved and for the promise of what they will accomplish. In addition to the $25,000 prize and public recognition, Cole’s honor includes membership in the National Milken Educator Network, a group of more than 2,700 top teachers, principals and specialists dedicated to strengthening education.

In addition to participation in the Milken Educator Network, 2017-18 recipients will attend a Milken Educator Forum in Washington, D.C., March 20-23, 2018. Educators will have the opportunity to network with their new colleagues and hear from state and federal officials about the importance of maximizing their leadership roles to advance educator effectiveness.

More than $138 million in funding, including $68 million in individual $25,000 awards, has been devoted to the overall Awards initiative, which includes powerful professional development opportunities throughout recipients’ careers. Many have gone on to earn advanced degrees and be placed in prominent posts and on state and national education committees.

The Awards alternate yearly between elementary and secondary educators. Unlike most teacher recognition programs, the Milken Educator Award is completely unique: educators cannot apply for this recognition and do not even know they are under consideration. Candidates are sourced through a confidential selection process and then reviewed by blue ribbon panels appointed by state departments of education. Those most exceptional are recommended for the Award, with final approval by the Milken Family Foundation.

Past recipients have used their Awards to fund their children’s education or their own continuing education. Others have financed dream field trips, established scholarships and even funded the adoption of children.

For more information about the Milken Educator Awards, visit www.MilkenEducatorAwards.org or call MFF at (310) 570-4772.

About the Milken Educator Awards

The very first Milken Educator Awards were presented by the Milken Family Foundation 30 years ago in 1987. The Awards provide public recognition and individual financial rewards of $25,000 to elementary and secondary school teachers, principals and specialists from around the country who are furthering excellence in education. Recipients are heralded in early to mid-career for what they have achieved and for the promise of what they will accomplish.